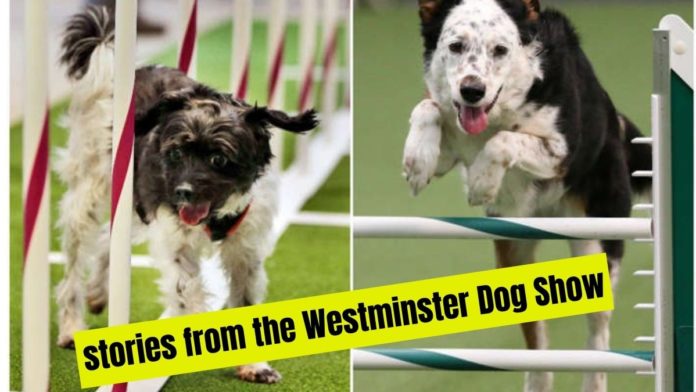 Clussexx Three D Grinchy Glee, aka Stump, was the oldest dog to win Best in Show at age 10 – he had spent four years retired before his win.

Stump was also the first Sussex Spaniel to win Best in Show. Prior to his win in 2009, Stump had suffered a bacterial infection that nearly killed him. He spent four years in retirement before returning to competition. When his owners and caretakers entered him in the show, no one expected him to perform well, let alone win, but he ended up taking first prize.

Emma the dog survived a shelter to become an agility competitor.

According to E! News, Emma was found in an abandoned motel in 2010 and taken to a shelter that euthanizes dogs that are not adopted within 48 hours. Luckily for Emma, her new owner, Christy Wrede, found her in time and took her home.
Although Wrede had no experience training dogs, she began teaching Emma agility, and she was so successful that Wrede enrolled her at Westminster in 2014. This was the first year the competition allowed “mixed breed dogs” to compete in an agility portion, in which Emma competed.

Lonnie, a mixed breed dog born in an animal shelter, was “afraid of everything” before Westminster.

His owner, Robin Lembo, told the Associated Press in 2017 that Lonnie was afraid to get into his car. Lembo began training Lonnie in obedience to build her confidence, and the pup couldn’t get enough, eventually showing off her moves at the 2017 Masters of Agility.

In 2008, Uno proved that the beagle, a breed that had never won Best in Show in the show’s 132-year history, was worthy of the prestigious title.

At the 132nd Westminster Dog Show, K-Run’s Park Me in First, aka Uno, became the first beagle to win Best in Show.
He was a very popular dog, probably receiving more praise from the crowd than any other dog. After his win in 2008, he became the first Westminster winner to visit the White House, hosted by President George W. Bush and First Lady Laura Bush. They met him in the Rose Garden and presented him with a red, white, and blue-collar.

Although her breed has never won best in show, Heart the Labrador retriever has won the Master Obedience Championship every year since its inception in 2016.

Although a Labrador retriever has never before won best in show, Heart and her owner, Linda Brennan, have shown that the breed has what it takes to win at Westminster – they have won five consecutive trophies for the Masters Obedience Championship since its inception in 2016.

Each championship requires a dog and owner to perform their own six-minute routine to show off their unique moves.
“It’s a little overwhelming, really,” Brennan told NJ Advance Media after their most recent win in 2020. “It’s hard to believe. He’s an amazing dog.”

A certified therapy dog for nine years, Hailey has brought smiles to people’s faces as she has made hundreds of visits a year to hospitals, nursing homes, and senior centers, according to the American Kennel Club.
In 2016, she also brought joy to spectators at the Westminster Master Agility Championship.

In a 2014 interview with ESPN, Hailey’s owner, Karen Profenna, talked about having a mixed-breed dog in Westminster. “Some people accept us now, but when we first started, people would give you looks like, ‘Where did that dog come from?’ or ‘Oh my God, what is that?'” she said.

Alfie, a poodle cross, entered the big leagues after being adopted from a mall pet store.

Alfie’s owner, Irene Palmerini, first saw him at a mall pet store, on sale for $99. She said he had so much energy that she decided to take him to agility classes. Seven years later, in 2014, she entered him in Westminster for the agility trial.
“I didn’t raise this dog to do agility. He’s just my pet,” she told the Associated Press in 2014. “(Agility) is just about performance. It doesn’t matter what your dog looks like. It doesn’t matter who his mother or father was.”

Scarf Torums Michael, aka Mick, was the first Kerry blue terrier to win Best in Show. Historically, the breed was known as a farmer’s dog.

Mick won his title in 2003, making him the first Kerry blue terrier to do so. Unlike other terriers, Kerry Blue terriers have a less noble lineage, and they were often bred as peasant dogs.
The Kerry Blue Terrier Foundation describes them as “a stubborn, headstrong and independent dog, obsessed with squirrels (or the house cat), willing to take risks, guess and outsmart his owner.”

In 2015, a quiet beagle named Miss P surprised the crowd by beating out favorites, including Sunny Obama’s cousin and a shih tzu owned by Patty Hearst.

The Associated Press noted that “the ring for the best-of-seven final was packed with favorites,” including Swagger, the elderly English sheepdog who finished second in the contest two years earlier.
So the crowd gasped when Miss P was named Best Dog.
“She’s a princess,” said her owner, Will Alexander.

Plop, who was rescued from a shelter after his owner saw him on Facebook, won the 2019 All American agility category.

Small in size but big in speed, Plop was the fastest All American dog in the 2019 agility event. Plop’s owner, Lisa Topol, found him on Facebook, where he was advertised by a shelter in Alabama. They quickly became inseparable and would go on to win many agility trials together.

In 1999, Loteki Supernatural Being, aka Kirby, became the first Papillon to win first prize – he was 8 years old.

Kirby made history by being the first of his breed to win Best in Show, but he was also unique in other ways. He weighed only 5 pounds and was 8 years old at the time, making him one of the oldest dogs to win.
His owner John Oulton told the New York Times in 1999 that Kirby wasn’t as stuffy as he looked. “At home, he’s a tough little guy; he struggles in the yard with the other dogs,” he said.

Great Elms Prince Charming II Pomeranian was the smallest dog to ever win, at only 4.5 pounds.

Not only the smallest dog to ever win, but also the first Pomeranian, Prince Charming II had two historic firsts when he won in 1988.

Panda competed in the first year that mutant or “all-American” dogs were allowed in Westminster.

A mix of Australian Shepherd and Cattle Dog, Panda finished fourth in her class at the 2014 show. She was one of the first mutants or “all-American” dogs to compete. Westminster has long been criticized by animal rights groups like PETA for excluding mixed-breed dogs, believing it hurt the chances of shelter dogs being adopted by favoring purebreds.

Foxcliffe Hickory Wind overcame the temperamental nature of his breed to become the first Scottish pointing dog to be named best dog in show.

Foxcliffe Hickory Wind won the top prize in 2011. Although hounds can sometimes be a bit more temperamental, Foxcliffe made it through the competition.
Her owner, Angela Lloyd, told the New York Times, “She was solid and steady, and despite all the lights and cameras and noise and spotlights, she did well.

All American Sadie was rescued from a desperate situation in Kentucky.

In 2014, Sadie competed with her owner, Lisa Tibbals, who found her on Petfinder.
Tibbals said she knew Sadie was special from the moment she first saw her, “There was something about her face that just grabbed me.”

Keep your Pet Protected from Poisons

Keep your Pet Protected from Poisons If you fear that you dog could have been poisoned or may have...
Read more
Dogs

Keep your Dog Safe, Use a Leash

Keep your Dog Safe, Use a Leash You should treat your dog as you would a toddler, you would...
Read more
Dogs

Traveling With Your Dog

Traveling With Your Dog Traveling with your dog can be a stressful event. Below you will find information on...
Read more

Are you Ready to Buy a Horse?

Are you Ready to Buy a Horse? Horses are excellent athletic creatures and can make a delightful, loving family...
Read more

Happy Valentine’s Day – A Horse Story… Sonny where are you? Sonny? As I was wandering the field looking...
Read more

Is Your Cat Pregnant?

Is Your Cat Pregnant? Many times when a cat is pregnant, the owner may not be aware right away....
Read more

Benefits to Spaying & Neutering Your Cat

Benefits to Spaying & Neutering Your Cat Every year millions of healthy, adorable and lovable cats and kittens are...
Read more
Load more

https://thuocladientu123.com on Funny Animal Videos 2021 – Impossible not to laugh – Funny Videos
Tierra Gilles on 10 Cutest Exotic Animals You Can Own as Pets
© buzzopets.com
We use cookies on our website to give you the most relevant experience by remembering your preferences and repeat visits. By clicking “Accept”, you consent to the use of ALL the cookies.
Cookie settingsACCEPT
Manage consent

This website uses cookies to improve your experience while you navigate through the website. Out of these, the cookies that are categorized as necessary are stored on your browser as they are essential for the working of basic functionalities of the website. We also use third-party cookies that help us analyze and understand how you use this website. These cookies will be stored in your browser only with your consent. You also have the option to opt-out of these cookies. But opting out of some of these cookies may affect your browsing experience.
Necessary Always Enabled
Necessary cookies are absolutely essential for the website to function properly. This category only includes cookies that ensures basic functionalities and security features of the website. These cookies do not store any personal information.
Non-necessary
Any cookies that may not be particularly necessary for the website to function and is used specifically to collect user personal data via analytics, ads, other embedded contents are termed as non-necessary cookies. It is mandatory to procure user consent prior to running these cookies on your website.
SAVE & ACCEPT